One early morning while on patrol, Officer John “Jack” Kane of the Dewey Beach, Delaware, Police Department observed smoke coming from the bayside area of Dewey Beach. The officer drove toward the smoke and located a house on fire, the front of which was fully engulfed in flames.

Officer Kane called 911 to notify the fire department and EMS of the incident. He then ran to the rear of the house and up the stairs, where he helped escort the residents to safety.

Due to windy weather conditions, two additional houses nearby caught fire before the fire department arrived. Officer Kane ran into those and other neighboring homes to alert and evacuate the occupants, even running back into a burning house to rescue a dog.

After Officer Kane ended his 14-hour shift, he was on his way home when he heard a call about a cardiac arrest. He was one street over and, just as he did hours before, did not hesitate to help. Together with a Delaware state trooper, Officer Kane performed CPR on the victim, who ultimately survived the health scare. 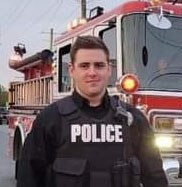