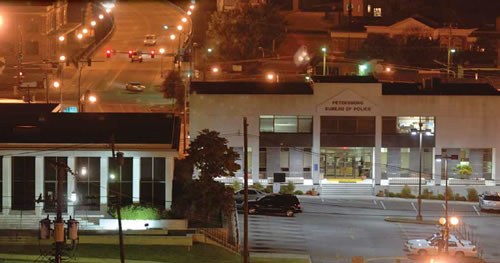 Petersburg, located in south central Virginia, has a population of about 30,000 people and encompasses 23 square miles—relatively compact compared with surrounding jurisdictions. The city also sits approximately 25 miles south of Richmond, the state capital. From January 2005 to December 2008, an alarming increase in violent crime occurred, earning Petersburg the notorious distinction of the most violent city per capita and the most dangerous place to live in the state.

Of the 329 violent crimes in 2009, most notably contributing to the decrease were a 49 percent reduction in aggravated assaults and a 52 percent decline in robberies. In 2008, 335 cases of aggravated assault occurred, compared with 170 incidents in 2009. The number of robberies fell from 257 to 122 during the same time frame. In 2008, the city experienced 4,777 property crimes, compared with 3,430 in 2009. Theft from autos encompassed a large number of total property crimes; according to an analysis of police reports, most items stolen were valuables left in plain view. Incidents of property crime could be significantly lower if individuals would use extra vigilance by removing visible valuables from unattended vehicles.

This trend has continued. The first six months of 2010 have shown further decreases of 30 percent in violent crime. The agency’s strategy certainly has resulted in a safer city. 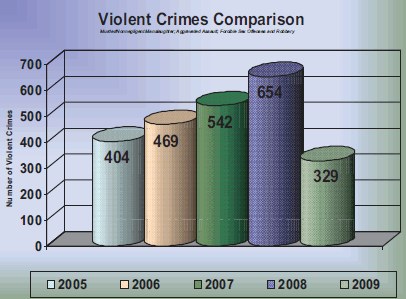 The successful crime decline has resulted from several key elements. Some of these include an increased retention rate of officers, successful grant attainment, strategic focus on crime patterns, and community ownership and shared responsibility in crime control.

During the period of 2007 and the first half of 2008, a Petersburg police officer’s salary was significantly less than in surrounding jurisdictions. Concerned citizens pressured city council with a petition of nearly 300 signatures, letters to the newspaper editor, public comments, and community rallies, all of which resulted in the highest single-time increase in police salaries. Dispatchers and other administrative personnel also received raises. In May 2008, the department operated at 75 percent capacity of sworn officers, with only 80 of the then-authorized 112 positions filled. A federal grant through the Recovery Act of 2009 allowed the agency to increase its sworn strength by five officers to 117 positions. Since the salary increase in July 2008, 16 certified officers from other jurisdictions joined Petersburg’s force. Of those, only two have resigned from the department, making retention the highest it has been in over a decade.

Community involvement has contributed significantly to the reduction of crime within the city. Officers are directly involved with Petersburg Dinwiddie Crime Solvers; the Police Summer Youth Enrichment Program; Neighborhood Watch groups; community events, such as National Night Out Against Crime; community-based crime trends meetings; and themed academies. The chief’s office coordinated community picnics during potentially volatile summer months with local motorcycle groups in various parts of the city, and merchants eagerly donated food, supplies, and games. Radio personalities hosted summer events, which added a greater attraction to the large crowds. Children participated in bike rodeos and received complimentary safety helmets to encourage safe outdoor physical activity. Several community groups and organizations exist within Petersburg, including Petersburg/Dinwiddie Crime Solvers, Summer Youth Enrichment, and 22 Neighborhood Watch groups. Community events include Police and Community Together (PACT), National Night Out Against Crime, and community focus groups. One of the major goals of these community groups is to get as many civilians as possible to participate in anticrime efforts.

Community involvement also includes the anonymous tips system Crime Solvers. Petersburg Dinwiddie Crime Solvers, a nonprofit organization, allows citizens to report crimes or the whereabouts of fugitives. Its Web site, http://www.pdcrimesolvers.org, has had a 67 percent increase in visitors because of the addition of fugitive photos in the winter of 2009. In some cases, fugitives have turned themselves in after becoming prominently featured on the site. The organization celebrates 25 years of existence in 2010 and has a strong, transparent, and accountable board of volunteers representing businesses, community leaders, and government bodies.

Technology advancements also have led to the drop in crime. Improved training and the use of more sophisticated computer systems to allow for real-time processing of crime incidents had an immediate impact. Officers have the capability to use mobile data terminals in their vehicles to log reports from the field, rather than traveling to and spending time at the station typing reports. This has increased statistical accuracy and enhanced the submission of data to law enforcement regulating bodies.

The combination of focused management and encouragement to address problems while holding officers accountable has made a profound difference in the prevention, response, and ownership of public safety in Petersburg, Virginia. By creating a culture of competency, high standards, and constant communication with citizens, the city has experienced the largest crime drop in a decade. Of significance, the transformation has been successful citywide, not merely an improvement limited to small areas. Petersburg’s success demonstrates that crime in urban areas can be successfully counteracted.