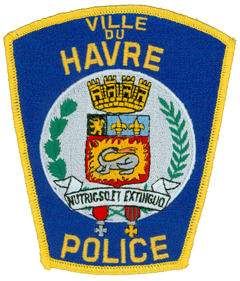 The city of Havre Montana, was named after the French port city of Le Havre after residents elected to change its name from Bullhook Bottoms. The patch of the Havre Police Department depicts the coat of arms of Le Havre. It features a rampart at the top, a lion rampant and two fleurs-de-lis in the middle, branches of oak and olive leaves to the sides, and the Cross of the Legion of Honor and the War Cross at the bottom. Most noteworthy is the salamander in the coat’s center, which was the personal emblem of King Francis I, the founder of Le Havre. The king’s personal motto, translated, “I stoke and extinguish,” references the salamander’s alleged ability to stay alive in flames.