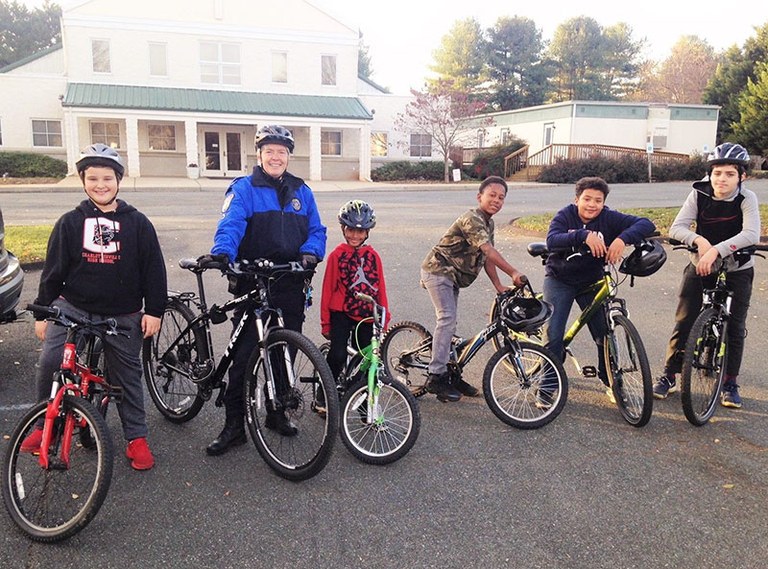 Officer Lynn Childers of the Charlottesville, Virginia, Police Department began the Pedal Power program in late 2017, when she saw a need and asked the community and the Charlottesville Police Foundation (CPF) to help. Her mission is to “link cops and kids together” through a neighborhood bike program.

In the summer of 2017, when the large boxes of kids’ bike helmets showed up at the police department, I took some over to [a local neighborhood], as I always see kids there on bikes with no helmets. As I started giving them out, I noticed the poor condition of some of the bikes and started to make some simple repairs. It quickly became apparent that some of these bikes were in such bad condition they were actually dangerous to be riding.

Being the avid cyclist that I am, I knew if I reached out to the cycling community, I would be able to get some donated bikes for these kids. So, I started making contacts, and the bikes have been rolling in! I set a goal to get a bike for every kid [in that area] that wants one. The kids have been lining up for new bikes, and I have a pretty big wish list. This has developed into a little ‘bike club,’ and we meet every Tuesday afternoon to work on bike riding skills and have contests, etc. It’s super exciting to me to see these kids having fun with a police officer, and we all look forward to it every week.

After this terrific start, Officer Childers organized a bike festival, complete with games, races, skill challenges, food, and prizes. CPF helped sponsor the festival and purchased bikes for Officer Childers to distribute to children in the community. It will be exciting to see where the program heads in the future.

For additional information, Executive Director Gail Milligan can be reached at gail.milligan@cvillepolicefoundation.org.