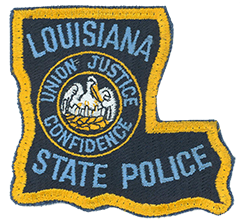 The Louisiana State Police was created in 1936 when the state legislature combined the highway patrol with the bureau of criminal investigation. The shoulder patch of the Louisiana State Police dates back to its founding year. Its patch forms the “boot,” or “L,” shape of the state. The department is one of only four state police agencies nationwide to fashion its patch in the outline of the state it serves. Within the patch is the Louisiana State Seal, featuring a pelican—the state bird—in a nest feeding three of its young. Surrounding the seal are the words “Union, Justice, Confidence,” the state motto