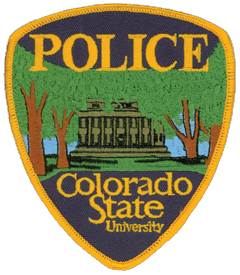 The patch of the Colorado State University Police Department in Fort Collins features the school’s prominent stone-columned Administration Building as seen from the south end of the Oval, an expansive park one-quarter mile around. The Oval has been a center of activity on the campus since 1909 and is lined with 65 American elm trees, some of which are depicted on the police department patch. A number of other academic and administrative buildings line this green area, the oldest of which was built in 1881, 11 years after the university’s founding.