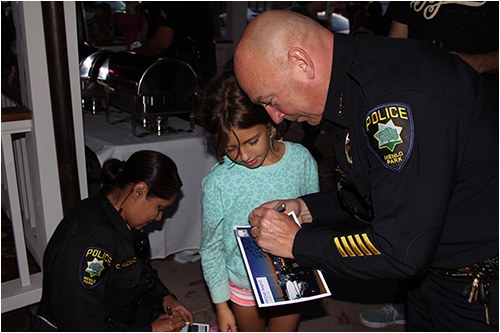 Located in southern San Mateo County, California, the city of Menlo Park is home to 32,000 residents and considered one of the most culturally and economically diverse populations in Silicon Valley. Menlo Park is recognized as the epicenter of venture capitalism; however, one area within the city, the Belle Haven neighborhood, has undergone revitalization and redevelopment efforts since 1981. Historically, Belle Haven has experienced the highest levels of violent crime in Menlo Park, and efforts to diminish the crime rate have proven challenging. Although, since the current chief joined the Menlo Park Police Department (MPPD), great strides have been taken to bring the community together, connect officers to the public in a nonthreatening way, and work to reduce overall crime.

One step taken by the MPPD is a community outreach effort called “Friday Night Lights.” This outreach extends to every corner of the city and involves the entire community. The police chief established the activity, which occurs exclusively during football season and brings officers and neighbors together. On several Friday nights throughout the season, a venue is established where local children are encouraged to approach police officers for their autographs. Officers sign a postcard that features a photo of the patrol team hosting that evening’s event. After the kids get autographs from all of the officers pictured on the postcard, they present the card to an MPPD employee, who provides them with the prize of the evening.

Everyone has the opportunity to participate in meeting and socializing with the officers at different locations throughout the city. In addition, the department schedules the events so that officers patrolling that evening have the chance to take part. Different teams are scheduled throughout the season so that every officer who works patrol is introduced to the community. Local restaurants host and cater some of the events, while others are simple, with pizza and popcorn. Friday Night Lights provides a unique occasion for everyone to get to know local officers in a casual setting.

This event, as well as other community outreach opportunities, enables the public to see a different side of law enforcement. It provides a chance to further communication between police and the community they serve. These efforts, in conjunction with other community policing and crime reduction strategies, have resulted in a significant decrease in local crime.

Community Outreach Spotlight is a new department that highlights unique and innovative ways in which law enforcement agencies engage with their communities to build or strengthen local partnerships. If you have an event or story to share, please submit photos and a short write-up to leb@ic.fbi.gov for review and possible publication.