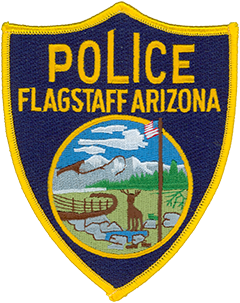 Nestled 7,000 feet above sea level in the world’s largest ponderosa pine forest, Flagstaff, Arizona, is known as the City of Seven Wonders because of its proximity to the snow-capped, 13,000-foot San Francisco Peaks, the Grand Canyon, and numerous other scenic views in northern Arizona. Many of these views are depicted on the patch of the city’s police department. Most prominent is the city’s namesake, a pine tree stripped of its branches to serve as a flagstaff for the American flag on July 4th, 1876. The elk in the foreground represents the serenity and abundant wildlife of the area. Steeped in history and diversity, Flagstaff serves as the seat of Coconino County, the nation’s second-largest county.