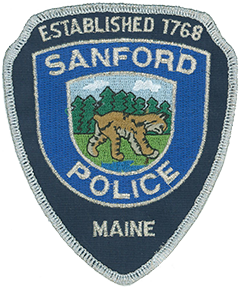 The city of Sanford, Maine, which includes the village of Springvale, is situated on the Mousam River in the state’s southernmost county. First settled in 1739 and established as a town in 1768, Sanford was rechartered as a city on January 1, 2013. It is named after Peleg Sanford, the colonial governor of Rhode Island from 1680 to 1683. The city is known for its lakes and wooded areas, which at one time were heavily populated by bobcats. These natural features are depicted on the service patch of the Sanford Police Department. The bobcat is the symbol of the department; though difficult to see, it is represented stepping on a mouse.