When a large group of police officers showed up at the door, Kelvin did not hide, run, or feel afraid. Instead, the 19-year-old was more than happy to see the police. For the next 3 hours, he and 25 other youths sat and played video games with members of the Taunton, Massachusetts, Police Department.

“You don’t expect to see a cop playing [video games],” said Kelvin. “We got to see the other side of police you don’t think about.”

“I didn’t know what to expect. Before, I was a little iffy about police, I admit it,” said 15-year-old Jonathan. “The impressions I had were usually negative. But, we had a good time. I met a cool cop who spoke Spanish. They were setting a good influence.”

On July 30, 2019, Taunton police teamed with local youths for the city’s first-ever video game event, held in partnership with a local gaming center. Over 20 police officers, including Chief Edward Walsh, played video games with youths from the community.

“Before, I had a so-so opinion of cops,” said 10-year-old Zayveon. “We did what we said we were going to do. We wiped them.” 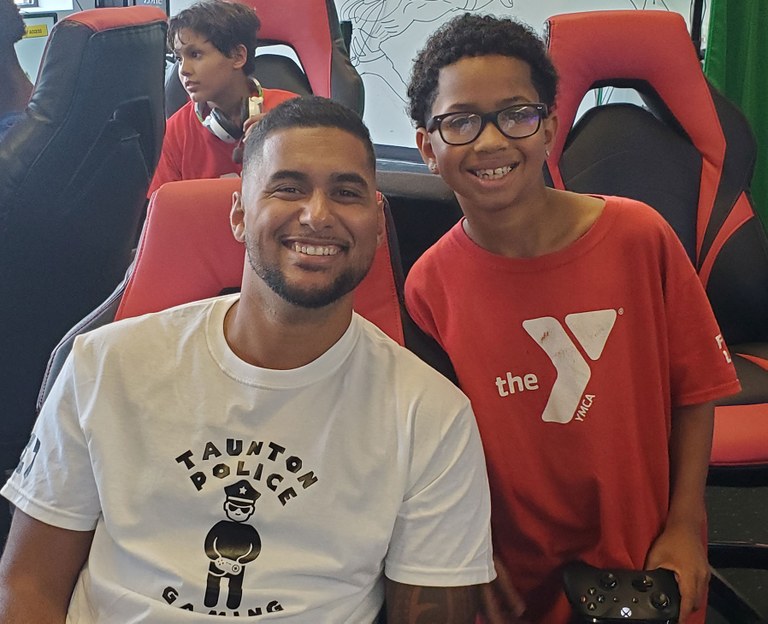 Before the event, Zayveon said, his view of police was shaped largely by what he saw on YouTube. But, something changed after playing video games side by side with police. “It was mad fun.”

Alex said he was nervous before the event and “afraid of police a little.” But, once the games began, it became a fun competition. “I was expecting a challenge from them. When I saw them, I knew it was going to be easy.”

Gabriel, 9, said he was “really nervous” before the games began, but once he sat down with a police officer and began playing, “I was excited. I thought it was going to be hard.”

Kelvin was impressed with the level of competition. “I was surprised how good the police were.”

Patrolman Elizabeth Morrison tried her hand at a game and gave it her best, but her teen partner said, “You are no match for me. I just beat you eight games in a row. I’m going to need some better competition.”

Chief Walsh said the nontraditional police interaction was an ideal opportunity for each officer to “have an impact as a positive role model, which is especially important given the negative perceptions portrayed about law enforcement on social media and other sources.” Police already are planning more gaming events.

For additional information, Lieutenant Nichols can be reached at enichols@tauntonpd.com.