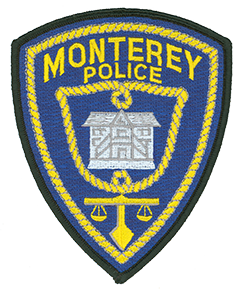 The patch of the Monterey, California, Police Department reflects the rich history and diverse culture of the city it serves. Located on central California’s Pacific coast, the area surrounding Monterey first was explored by a Spanish expedition in 1769 and settled the following year. Following its independence in 1821, the city was ceded to Mexico, then acquired by the United States in 1846. The center of the patch depicts Colton Hall, where, on October 13, 1849, the state’s first constitution was drafted and signed. The scales of justice at the bottom of the patch symbolize the Monterey Police Department’s commitment to fair and unbiased administration of the law. The rope that surrounds the patch evokes both Monterey’s maritime history and the vaqueros and cowboys who lived in the area when the city was incorporated in 1890.