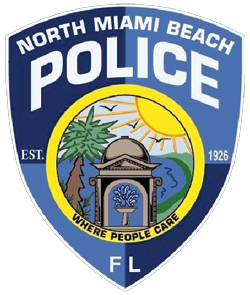 The city of North Miami Beach, Florida, was established in 1926 as Fulford by the Sea. Shortly after its founding, a hurricane destroyed three of the four stone water fountains built at the city’s four corners. The remaining fountain, which still stands, is depicted as a symbol of perseverance on the patch of the city’s police department. The patch also depicts the city’s popular seashore, a palm tree, and the sun with rays, three symbols reminiscent of the Great Seal of Florida.