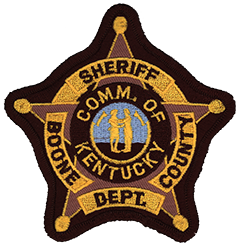 The patch of the Boone County, Kentucky, Sheriff’s Office depicts two men, one in buckskin and the other in more formal dress, facing each other and clasping hands. This represents the state motto, “United we stand, divided we fall.” Popular belief identifies the buckskin-clad man as Daniel Boone, largely responsible for the exploration of the state, and the man in the suit as Henry Clay, Kentucky’s most famous statesman. However, according to the official explanation, the men represent all frontiersmen and statesmen, rather than specific persons.