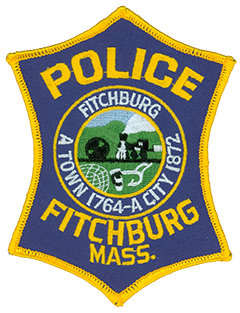 Fitchburg, Massachusetts, was incorporated in 1764 and grew through the following century to become an industrial center. The patch of the city’s police department bears the unique appearance of an elongated six-pointed star. In its center is the city seal, representing the industry and agriculture that shaped Fitchburg in its early years. The seal’s background depicts Rollstone Hill, which was relied upon heavily for its granite products.