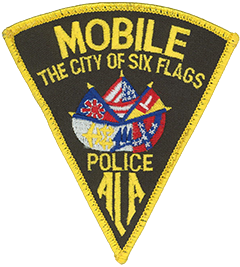 The patch of the Mobile, Alabama, Police Department depicts the six flags under which the city has existed—clockwise from the top, these are the United States, Spain, the Confederate States, the Republic of Alabama, France, and Great Britain. Mobile was founded in 1702 by French settlers and established as the first capital of the Louisiana Territory. In 1763 France ceded the city and its surrounding territory to Great Britain. Spain captured and claimed Mobile in 1780, though 10 years later it was ceded back to France. In 1803 President Thomas Jefferson purchased the Louisiana Territory, and Mobile became a U.S. city. When the State of Alabama seceded in 1861, the Republic of Alabama was briefly formed, then merged into the Confederate States. At the end of the Civil War, Alabama and Mobile rejoined the United States. Today Mobile is the third most populous city in the state, with over 195,000 residents.