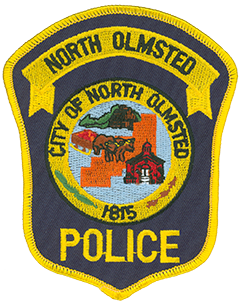 The patch of the North Olmsted, Ohio, Police Department was designed by the 16-year-old son of one of the officers. In the circle at the center, the blue background symbolizes the sky; North Olmsted is outlined in orange. An ox-drawn cart/sled is loaded with the books that established the area’s first organized library. A red brick building represents the original town hall, built in 1913. The log cabin signifies Olmsted’s first home, which later became a schoolhouse. The yellow band surrounding the circle features the year in which the area first was settled—1815. Three leaves recognize the butternut trees common in the area, and three arrowheads honor the original Native American settlements in North Olmstead.