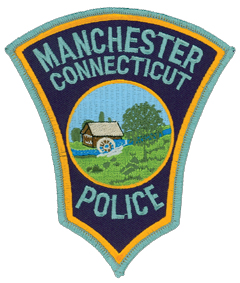 The interesting shape of the Manchester, Connecticut, Police Department patch resembles a white mulberry leaf, commonly fed upon by the silkworms providing the silk that contributed to the growth, culture, and fame of the town. Named after the major textile center in England, Manchester was the center of the silk industry throughout the 19th and early 20th century.