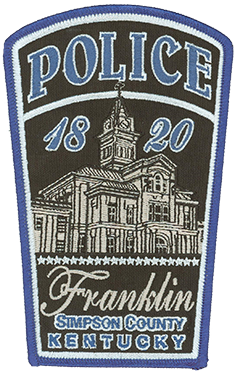 Named after Benjamin Franklin, the city of Franklin, Kentucky, was founded in 1820 and is the county seat of Simpson County. The Franklin Police Department was organized the same year, commemorated on the agency’s service patch. Also featured on the patch is the historic Simpson County Courthouse, built in 1882 and situated on Franklin Square, a local meeting place. On March 1, 1968, music legends Johnny Cash and June Carter Cash were married in Franklin.