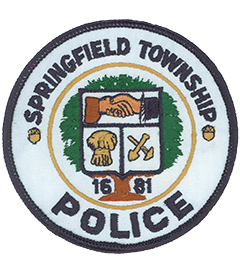 Springfield Township in Montgomery County, Pennsylvania, is one of nine townships statewide with the same name—one of these, in neighboring Delaware County, is only 22 miles away. The service patch of the Springfield Township Police Department depicts the official township seal, adopted in 1976 and worn by local officers ever since. The center of the patch features an outline of the Penn family shield; inside, the hand of William Penn, on the right, is shown linked in friendship with that of an American Indian, on the left. A sheaf of wheat is depicted in the lower left, representing early farming and the milling industry. The crossed shovel and pick in the lower right signify lime and iron ore quarrying. Behind the shield is the Penn Oak Tree, which stood in the area for 339 years until December 10, 1975. The township’s founding year, 1681, is featured at the base of the tree.