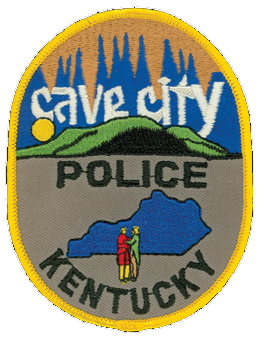 True to its name, Cave City, Kentucky, is in close proximity to the world’s longest known system of caves, the over-390-mile Mammoth Cave National Park. Visitors to the park fuel the tourism industry on which the city thrives. As such, the patch of the Cave City Police Department pays homage to the caves with the stalactites hanging from above. Also depicted on the patch are the rolling hills of Kentucky and a layout of the commonwealth superimposed by the two men portrayed on the Seal of Kentucky.