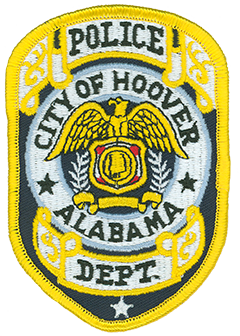 The city of Hoover, Alabama, was founded in 1954 by William H. Hoover, Sr., a local insurance salesman and developer, and incorporated on April 28, 1967. Growing from a population of 406, the city today has over 84,000 residents and is the largest suburb of Birmingham, Alabama’s largest city. The Hoover Police Department, founded in 1967, currently employs 166 officers and 62 civilian staff members. The department’s service patch features intricate scrollwork with gold edging at the top and bottom. In the center is a bald eagle with its wings spread over a shield. Within the shield is the Great Seal of Alabama, featuring a map of the state with its major rivers.