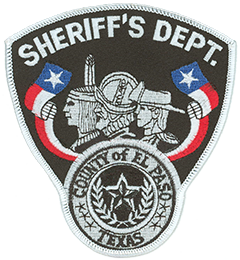 The patch of the El Paso County, Texas, Sheriff’s Department depicts three of the many cultures that settled the southwest—the American Indian, Spanish conquistador, and American cowboy. Bordering these representations are banners of the state of Texas’ Lone Star Flag and the seal of El Paso County. As part of the old wild west, El Paso played host to the likes of Pancho Villa, William Bonney (a.k.a. Billy the Kid), and John Wesley Hardin. Today the city and its neighbor across the border, Ciudad Juarez, Mexico, have developed into a modern and progressive region, forming the largest bilingual, binational workforce in the Western Hemisphere.