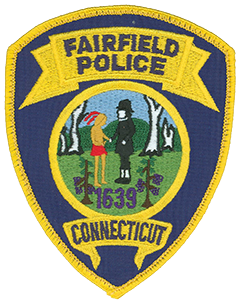 The town of Fairfield, Connecticut, was established in 1639 by Roger Ludlow, a framer of the Fundamental Orders of Connecticut, one of the world’s first written constitutions for a self-governing people. The Fairfield Police Department was organized in August 1930 and serves a population of approximately 60,000 residents. Elements from the town’s seal are featured in the center of the department’s service patch. Amidst a background of trees and hills are two figures, a Native American and an English settler, grasping hands to seal a bargain. The foreground features the year of the town’s founding.