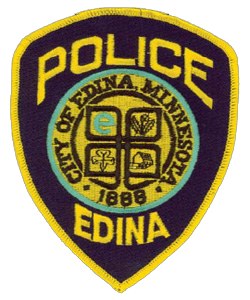 The patch of the Edina, Minnesota, Police Department shows the rich history and traditions of the town that the department serves. The central image displays the city’s seal, which it adopted in 1974. The seal recalls the Irish and Scottish immigrants who first settled in the community, as well as the mill they used to process their crops. The cloverleaf design that encompasses these symbols follows the general pattern of the city’s major highways. Below the image, the patch displays 1888 as the city’s year of incorporation.