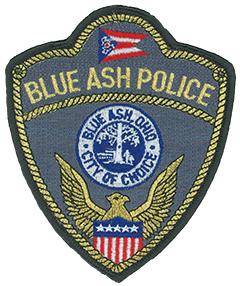 The city of Blue Ash, Ohio, is a suburb of Cincinnati and first was settled in 1791. The service patch of the Blue Ash Police Department depicts the Ohio state flag at the top, the city seal in the center, and an American bald eagle with the Union Shield at the bottom. Inside the blue and white city seal is an adult and child walking under a blue ash tree with a building in the distance. The motto of Blue Ash, “City of Choice,” is featured on the seal’s border. The patch’s rope edging, department name, and eagle are stitched in either metallic silver or gold thread depending on the rank of the officer—investigators and patrol officers wear the silver-lined patch, while sergeants and above sport the gold-lined version.