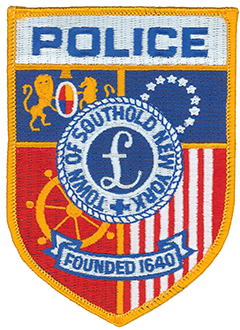 The town of Southold, New York, dates back to 1640 and is the first English settlement on Long Island. The Southold Police Department service patch features the town seal in its center, depicting the symbol for the British pound sterling, a reference to William Alexander, First Earl of Stirling, who was granted ownership of Long Island by King Charles I. Behind the seal on the upper left is the Royal Coat of Arms, representing the town’s English heritage. The lower left depicts a ship's wheel, symbolizing the town’s dependence on and relationship with the sea. The right side of the patch contains the 13 stars and stripes of the first American flag. The banner in the lower portion of the patch proudly proclaims Southold’s founding year.