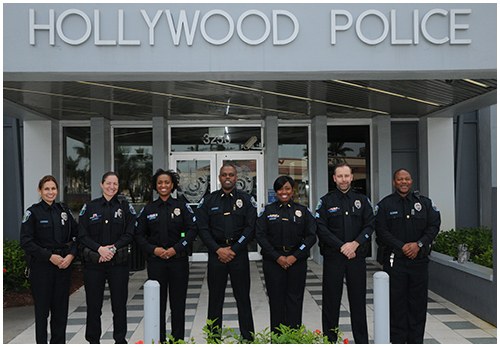 During the 2015-2016 school year, the Hollywood, Florida, Police Department (HPD), School Resource Officer Unit redefined the roles of school resource officers (SROs). Prior to the academic year, the new police chief took command of department. On the first day of work, he informed the head of the unit that the SRO program should return to the way it was in the early 2000s.

After coordinating with the chief, the SROs committed to extending their outreach from the schools to the community. Before the academic year began, meetings were held to discuss various opportunities for the unit. After reviewing endless possibilities, the unit chose to narrow its focus, and the SROs reduced the number of suggestions to a few they considered achievable.

They decided to focus on teaching Gang Resistance Education and Training (GREAT) to fifth and seventh graders, raising money for Thanksgiving meals for needy families, initiating Shop with a Cop, conducting a holiday toy drive, having the Easter Bunny visit schools, starting Story Time with an Officer, and establishing a summer camp. These ideas involved all unit personnel; however, some individual SROs focused on their own assigned schools and developed other initiatives, such as Cop for a Day, Chief for a Day, and a DUI presentation.

In today’s world, it proves essential for officers to eliminate barriers that impair community and police relationships. Usually, the first police officers children meet are the SROs who patrol their schools, teach in their classrooms, and greet them as they walk the hallways. Young people today often become exposed to negativity about police. SROs work to change the negative perception into a positive one and reinforce the worthwhile information youth receive. They emphasize antibullying, mentoring, and the GREAT program.

Officers can achieve this best by getting into the children’s classrooms and teaching them GREAT. The program, geared toward fifth and seventh graders, provides important life skills, such as decision making and critical thinking. The fifth grade curriculum provides 6 lessons, and the seventh grade course consists of 13. SROs must become certified GREAT instructors and teach one lesson per week until they complete the lessons.

During the first year of the program, HPD taught GREAT at 16 public schools. They educated approximately 1,295 fifth graders and 550 seventh graders. Through contact with these young people, SROs portrayed police officers in a positive light.

HPD SROs introduced another initiative that consisted of raising money to purchase Thanksgiving dinners for needy families. The unit e-mailed the entire department regarding what it hoped to accomplish. The response became overwhelming. The unit raised enough money to provide dinner for 46 families. The response from those who received the meals was heartwarming and uplifting for the SROs, who realized their plans coming to fruition.

Shop with a Cop

After these successful programs took hold, the unit initiated Shop with a Cop. The SROs focused on elementary and middle school children and rewarded them for accomplishments during the current school year or improvements from the previous year. They identified 22 young people deserving of this reward and raised money to provide the children with the opportunity to shop with an officer.

This proposal piqued interest within the department, and 22 officers of all ranks volunteered to shop with the children for the holidays. The students received gift cards to purchase an item for themselves and something for other members of their families. After each child finished shopping, officers escorted them to an area of the store where volunteers waited to wrap the items. When the shopping and wrapping concluded, the young people returned to their parents with bags of gifts for family members to open on Christmas morning.

Many officers opened their own wallets and helped the children pay for items priced over the amount of the gift cards. This unselfishness by police officers rarely makes the news or receives mention in the newspaper, but these acts were appreciated by the recipients, with no rewards or attention expected by the officers.

The SRO unit commenced another initiative—a holiday toy drive. Department personnel placed numerous boxes throughout the city to collect toys. Officers worked with school guidance counselors and identified families who would benefit the most. With the assistance of the HPD Public Affairs Unit and community members who donated, officers delivered toys to more than 75 families.

Officers developed plans for the Easter Bunny to appear at all public elementary schools in the city. Over a 3-day period, one SRO dressed in a bunny costume visited every kindergarten and first grade class in the city’s 13 public schools. The bunny distributed over 2,200 bags of candy to students. The SRO unit purchased and bagged the goodies without thoughts of any recognition.

Story Time with an Officer

Another popular program provided officers not assigned to the SRO unit the opportunity to visit schools and read to second grade students. Ten officers volunteered their time to read books to children in 13 public schools. Each reading session lasted 30 to 45 minutes and proved successful with the young people. The children benefited by having a story read to them by an officer and by seeing police in a constructive role.

The Hollywood Police Athletic League (HPAL) assumed the biggest project—summer camp for middle school children. The SRO unit raised enough money for 20 children from five middle schools to participate in the program at no cost to the parents. Officers identified participants from the GREAT classes they taught earlier in the school year.

The agenda consisted of a 4-week camp at the HPAL, which provided breakfast and lunch for every child attending. Young people enjoyed numerous field trips that included both fun and learning. They experienced water parks, movies, bowling, and beach days and visited a local farm, homeless shelter, gun safety class, and construction site.

Run primarily by three police officers, the summer camp also provided some high school youth with mandatory volunteer hours toward graduation. With the help of generous donations by the community, the department presented officers in a positive light to the families involved.

Through hard work, dedication, and determination, the Hollywood Police Department’s school resource officers made a difference in the lives of numerous families and their children. Police officers cannot eliminate all the barriers and issues in one school year, seven initiatives, or a small summer camp; however, everyone can agree that these programs and officers have provided an optimistic beginning. To help portray police in an admirable way, other agencies should develop programs with their schools and communities.

Community Outreach Spotlight is a new department highlighting innovative ways in which law enforcement agencies engage with their communities to build or strengthen local partnerships. If you have an event or story to share, please submit photos and a short write-up to leb@ic.fbi.gov for review and possible publication.

“In today’s world, it proves essential for officers to eliminate barriers that impair community and police relationships.”