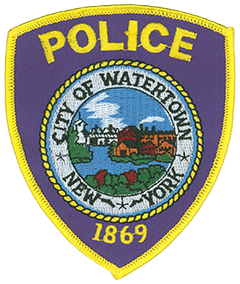 In April 1998 the Watertown, New York, Police Department adopted a new shoulder patch coinciding with its research into the city’s past. In the center of the patch is Watertown’s seal, which depicts the Black River, paper mills and factories formerly located along the river bank, and an old steel footbridge. The rope around the seal represents the department’s strong ties to the community and its citizens. Watertown and the department both were incorporated in the year 1869, which is depicted on the patch. Three stars in the white border around the seal stand for the original members of the Watertown Police Department.