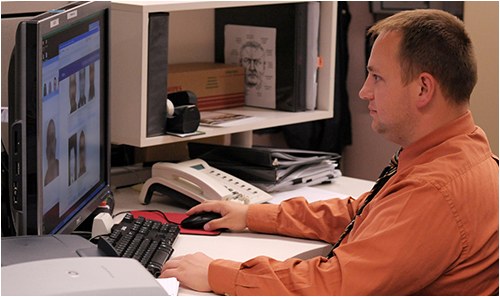 The Forensic Spotlight is a new department in the FBI Law Enforcement Bulletin (LEB) that highlights current and noteworthy developments in the forensic sciences. Articles in the Forensic Spotlight focus on topics such as fingerprinting, ballistics, toxicology, paint analysis, document validity, and other laboratory-based technology used in crime solving. Laboratories willing to share new and interesting information in the various fields of forensic science can submit their articles to the LEB at leb@ic.fbi.gov for review and possible publication in the Forensic Spotlight.

In July 1999 the FBI marked 75 years of fingerprint identification services by upgrading to the electronic capabilities of IAFIS from the manual process of classifying, identifying, and storing fingerprint cards—a system that had changed little in seven and a half decades. With the final pieces of IAFIS’ successor in place, FBI employees around the world now have instant access to the latest in biometric technology. The system is making successful identifications more quickly and efficiently than before. According to CJIS Division’s assistant director, “NGI is more accurate than IAFIS and leverages more advanced technology to help with investigations.”1

The planning for NGI began in 2007, and three years later the rollout of the system began with improvements to the electronic identification process for incoming fingerprint submissions. Later additions included improved search techniques for latent and palm prints, as well as a feature important to officer safety—the capability to receive fingerprint queries from mobile devices. The most recent increments have focused on new initiatives in biometrics to further help identify criminals.

The latest augmentation to NGI introduced two new features to the system: Rap Back and the Interstate Photo System (IPS). Rap Back provides an important feature for public safety regarding individuals working in public trust positions. IPS is a facial recognition service that allows law enforcement agencies to search photographs of criminals to assist with identifications.

For example, a board of education collects background information and requests a criminal check on teachers before hiring them. Prior to the NGI system, individuals hired into these positions who later were arrested for a crime could have avoided detection and remained in their positions until a new criminal check was conducted. Now, the Rap Back service allows the FBI to notify authorized agencies when individuals in positions of trust are arrested.

With IPS, agencies can view images collected by the FBI over several years, such as mug shots from criminal ten-print submissions, photographs from civil fingerprint submissions where agencies requested retention of the pictures, and bulk submissions of photographs from law enforcement agencies. This service does not make positive identifications, but, rather, it supplies agencies with a ranked list of candidates to consider. To maintain privacy and protection of rights, the facial recognition system is not connected to social media or any other Internet sites.

The system is designed to add features and functions. The assistant director of CJIS noted, “For those working on cases and investigations, NGI means not only increased accuracy when it comes to fingerprint checks, but also, now, with facial recognition technology, help with identifying persons of interest or suspects.”2 In the world of biometrics, NGI is state of the art and is ready for whatever is yet to come.