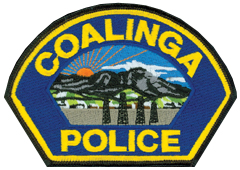 Coalinga, California, was founded in 1888 as “Coaling Station A” for the Southern Pacific railroad. Its history is founded upon the oil derricks depicted on the patch of its police department. Since the late-19th century, the city has played a key role in California’s oil production. Coalinga is located near California’s South Coast Ranges, also depicted on the city’s police patch.