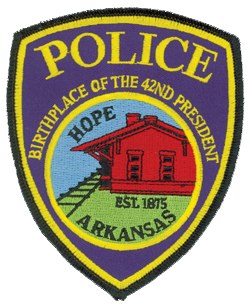 The patch for the Hope, Arkansas, Police Department depicts the city’s oldest building, its 1912 train depot, adjacent to railroad tracks. These serve to represent the commerce and social growth brought to Hope’s downtown area by the railroad since 1875, the year the city was established. The patch also proudly indicates that Hope is the birthplace of the 42nd President of the United States, Bill Clinton.