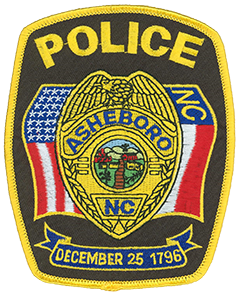 The badge of the Asheboro, North Carolina, Police Department is prominently depicted on the agency’s service patch. The Asheboro city seal is featured in the center. Within the seal is a depiction of a plank road that ran through the city in the 1700s, a prominent church from Asheboro’s early days, and a textile factory. The flags of the United States and North Carolina are shown to the left and right of the badge, respectively. The banner at the bottom displays the date on which Asheboro was chartered—Christmas Day, 1796.