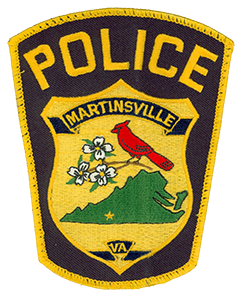 The city of Martinsville, Virginia, was named after Revolutionary War General and pioneer Joseph Martin, who first settled in the area in 1773. The patch of the city’s police department prominently depicts a shield encompassing the state of Virginia with a star near the bottom indicating the location of Martinsville. Also featured are the state bird, the cardinal, and the state flower, the dogwood.