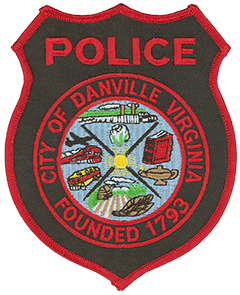 The Danville, Virginia, Police Department began on May 21, 1833, when a citizen patrol with compulsory service was established. By 1860, that patrol had expanded to include two sworn police officers. Today, the department has 139. Its patch is divided into four quadrants representing the cornerstones of Danville’s economy. The top depicts the textile industry that has dominated the city for over 50 years. The city’s educational opportunities are represented to the right. Danville’s reputation as the hub of the region’s tobacco industry is symbolized at the bottom. To the left, the confluence of roads, railroads, and air traffic recognizes the city’s status for over 200 years as the “Gateway to the South.”