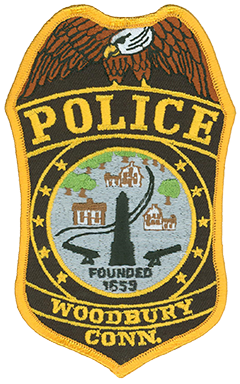 Woodbury, Connecticut, first was settled in 1659 as part of Pomperaug Plantation, named after the nearby Pomperaug River. The town itself came to fruition in 1673 and was named for its function as a “dwelling place in the woods.” The patch of the Woodbury Police Department prominently depicts the town’s Soldiers’ Monument within the center seal. Flanked by two cannons, the memorial obelisk was erected in 1871 in remembrance of Woodbury’s 65 soldiers who died during the American Civil War. Traversing the patch is U.S. Route 6, referred to as the “Grand Army of the Republic Highway.” Along the route are pictured several of Woodbury’s colonial-era buildings. Today the town is known throughout the state as the “Antiques Capital of Connecticut.”