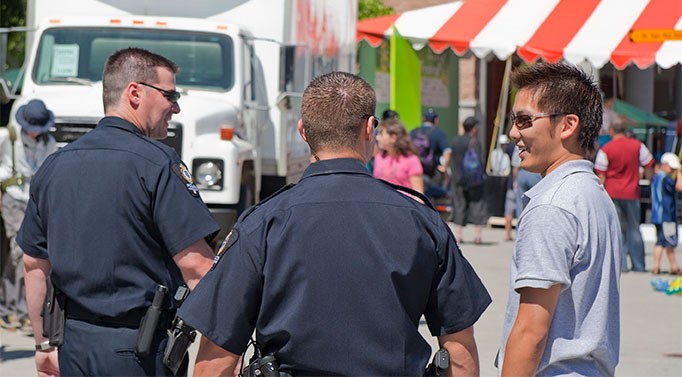 What would Positive Policing, a new approach based on Positive Psychology, look like on the streets of America? Certainly, it begins with training. When officers have an understanding of the PERMA (positive emotion, engagement, relationships, meaning, and accomplishment) model of well-being and a vivid image of their communities as gardens to care for, a new beginning can emerge.1

Another valuable concept of Positive Psychology for officers to understand is that of the “red cape and green cape.” Dr. James Pawelski at the University of Pennsylvania describes this as a “thought experiment” where we all are born as superheroes with a reversible cape. On the red side, power is provided to fight against evil and wrongdoing in the world—things such as “poverty, injustice, hunger, and violence.” The green side offers the ability to help grow and develop the good—this includes “harmony, understanding, meaning, and justice.”2

Dr. Pawelski further stated that we need both the red and green capes to achieve “well-being and to flourish” in life. He pointed out a human tendency to overuse the red cape because of the way we are wired for survival and sensitive to anything that might hurt us.3

Policing over the past century has been consistent with this thought experiment in that we have focused on red-cape services and neglected green-cape services. At its essence, Positive Psychology holds that human beings need to concentrate more on opportunities to grow and cultivate the good and focus less on the bad and what is going wrong. We need to use the green side of our cape, rather than the red side, much more often. Only then can we flourish.

So, what would Positive Policing look like on the streets of America? The answer fits into the current discussion on whether to defund or reform policing. Most people agree that defunding police leaves our communities unprotected and vulnerable to criminal elements and is an emotional reaction to painful events, including the tragic loss of human life. On the other hand, reforming policing is an evidence-based reaction to both individual and systemic failures exposed by those same painful events. Has the time come for political leaders to acknowledge that public safety and policing are critical components of public health and increase funding? I do not propose an increase of funding toward police services associated with the red side of the cape, but, rather, the green side.

What if it became policy that every red-cape interaction with the community required one or more follow-up green-cape interactions? How many police agencies conduct a difficult arrest of a noncompliant person and never go back to address what happened and why with the family members and neighbors of that arrested person? Of course, a few do, but did policy drive that follow-up visit or did individual care, concern, and initiative bring about a follow-up conversation that allowed understanding, processing, and closure for those affected by the arrest?

Embracing new partnerships between policing and other public health services deserves further exploration. How can agencies transition from a largely red-cape mission to a more balanced one where they help the community learn to grow and flourish? Using the garden analogy, red-cape services entail the careful pruning of that which is not healthy for the community as a whole.

Delivering red-cape services alone is no longer enough. Police agencies must focus on green-cape services as well, those that address opportunity and growth potential, expand on positive attributes and behaviors, and foster a positive outlook and outcome even in negative situations.

And, concerning the younger generation, they have taken the first step in identifying injustice and exercised their constitutional right to peacefully protest. Why not take action one step further and be part of making the difference through positive change? Young people can fill out an application at their nearest police agency. To effect change in policing, there is no more effective way than to join that police agency and effect change from within.

This is only the beginning of the positive changes that can be made to policing. Implementing Positive Policing will require resources—more training, additional staffing, and increased overall budgets for agencies. But, paying now for training and new applications of police service likely will cost far less than large settlements of lawsuits.

“At its essence, Positive Psychology holds that human beings need to concentrate more on opportunities to grow and cultivate the good and focus less on the bad and what is going wrong.”

Supervisory Special Agent Matthew W. Rebuck, an instructor in the Leadership Programs and Instruction Unit at the FBI Academy, prepared this Positive Policing Spotlight. He can be reached at mwrebuck@fbi.gov.