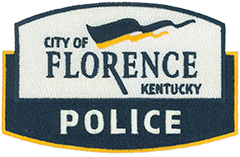 The city of Florence, Kentucky, is part of the Cincinnati metropolitan area and was incorporated on January 27, 1830. The patch of the Florence Police Department features a navy blue and gold flag blowing in the wind, signifying a city on the move. Initially, the area was called Crossroads, owing to the convergence of several routes from the nearby towns of Burlington and Union. By 1821, it was renamed Maddentown; then, Connersville 7 years later; and, finally, Florence because another Connersville existed 54 miles away. With almost 32,000 residents today, Florence is the second-largest city in northern Kentucky and one of the fastest-growing communities in the state. The city’s most prominent landmark is a nationally renowned 135-foot water tower proudly painted with the words “Florence Y’all.”