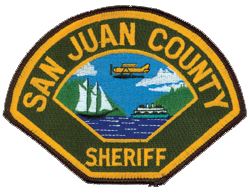 San Juan County, Washington, consists of 176 named islands and reefs located near the state’s northwestern border with Canada. Most of the population resides on the four largest islands, accessible solely by private boat, light aircraft, and the Washington State Ferries. All three modes of transportation are depicted on the patch of the San Juan County Sheriff’s Office, which patrols about 167 of the islands. Also shown is the rugged shoreline typical of the islands, as well as one of their many nearby straits.