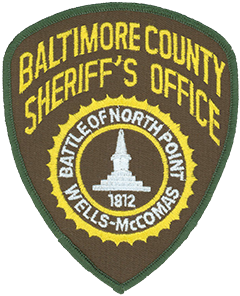 The patch of the Baltimore County, Maryland, Sheriff’s Office depicts the Wells and McComas Monument, a 21-foot obelisk built in 1873 to honor two members of the Maryland State Militia—Daniel Wells and Henry McComas—who defended Baltimore in the War of 1812. According to legend the two teenage militiamen shot and killed Major General Robert Ross, commanding officer of the British troops near the city, during the Battle of North Point on September 12, 1814. Wells and McComas both fell in battle shortly afterward and are interred beneath the monument that honors them.