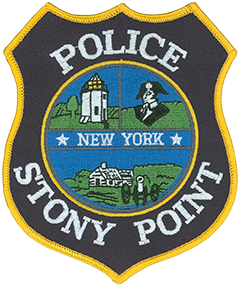 All three depictions on the patch of the Stony Point, New York, Police Department are a reference to the significant role the town played in the Revolutionary War. The Battle of Stony Point, which took place on July 16, 1779, was a quick and daring assault on a British outpost that afforded the Continental Army a major morale victory. The Stony Point Lighthouse, built in 1826, sits on the site of the battle and is depicted on the left. A bust of General “Mad” Anthony Wayne, the architect of the battle, is shown on the right. At the bottom is a Revolutionary-era building and artillery piece on the Stony Point Battlefield adjacent to the Hudson River.