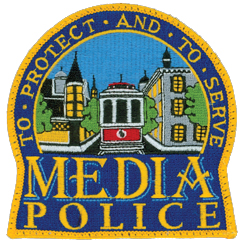 The borough of Media, Pennsylvania, was incorporated in 1850 and serves as the seat of government for Delaware County. Located 12 miles west of Philadelphia, the borough is one the few areas in the country that has used the same trolley system continuously since the turn of the 20th century. This still-active trolley is depicted on the patch of the Media Police Department alongside the area’s rich Victorian architecture. The depiction also serves as Media’s seal, which proudly states the borough is “Everybody’s Hometown.”