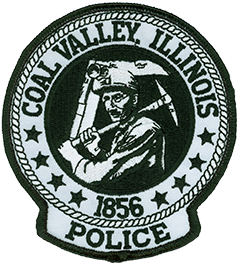 The black-and-white patch of the Coal Valley, Illinois, Police Department prominently features a coal miner standing at the opening of a mine. Coal Valley was incorporated in 1856 and named after the Coal Valley Mining Company, formed locally that year. From its inception to the mid-1870s, the village experienced a coal mining boom, with many other mining companies moving in. Though the mines have been closed since 1942, Coal Valley is proud of its rich heritage.