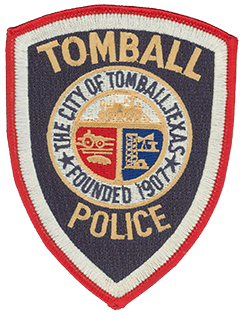 The Tomball, Texas, Police Department patch prominently features the seal of the city it serves. Founded in 1907, Tomball was named after Thomas Henry Ball, a turn-of-the-century Texas politician instrumental in routing the railroad through the area, giving it a population boom. The locomotive at the top of the seal references the city’s railroad-driven past. The tractor and field on the left allude to Tomball’s excellent farming and cattle-raising conditions—these two factors led to the area’s initial settlement in the early-19th century. Several oil derricks on the right represent the city’s part in the oil industry, which started with a 100-foot oil gusher on May 27, 1933, and led to an economic boom.