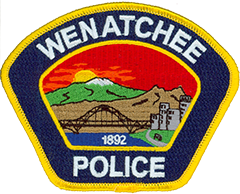 The patch of the Wenatchee, Washington, Police Department prominently features the sun setting over Mission Ridge, a skiing destination in the Cascade Mountains. Directly adjacent are the weathered rock towers of Saddle Rock, a popular local landmark. The Columbia River, which borders the city, is depicted in the foreground along with the Senator George Sellar Bridge and the Riverfront Park bike-loop trail. The year Wenatchee was incorporated, 1892, is shown at the bottom of the scene.