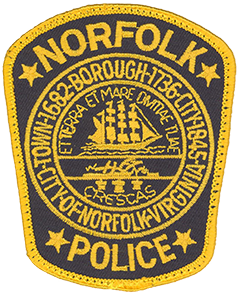 The patch of the Norfolk, Virginia, Police Department prominently depicts the Seal of the City of Norfolk. Adopted in 1913 the seal’s outer border gives a brief history of Norfolk’s evolution from a town in 1682 to a borough in 1736 and then a city in 1845. The top half of the inner circle consists of a ship under full sail, typifying maritime commerce and the city’s rich naval history. The bottom half depicts a field with a plow and three sheaves of wheat, representing agriculture. The Latin motto bordering the circle reads “Et terra et mare divitiae tuae crescas,” which translates as “May you increase your wealth on land and sea.”