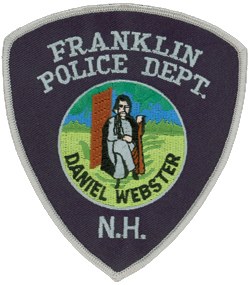 The city of Franklin, New Hampshire adopted its name in 1820 in honor of Benjamin Franklin. Another famous American statesman, Daniel Webster, is depicted on the patch of the Franklin Police Department. Webster was born in 1782 in a section of Franklin that was then part of Salisbury, New Hampshire. His birthplace has been preserved and is a state historic site.