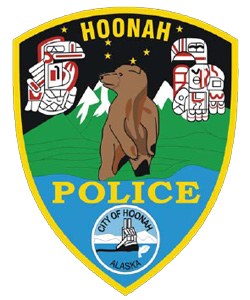 The patch of the Hoonah, Alaska, Police Department honors many natural wonders of the city and surrounding areas. Hoonah and nearby Chicagof Island have the highest per-capita grizzly bear population of any city in the world, hence the one in the center. Eagle and raven totem poles honor the Tlingit and Haida Indian Tribes. The snow-capped mountains capture the scenic landscape of Chicagof Island, and the water beneath them depicts the inland passage to the Pacific Ocean. The fishing boat at the bottom recognizes the importance of the local fishing industry.