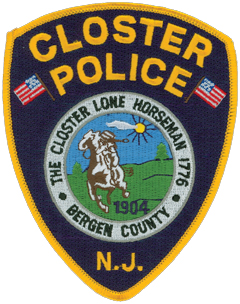 Closter, New Jersey, was settled in 1704 and was incorporated as a borough 200 years later. Its police department patch depicts a horseman. On November 20, 1776, a farmer witnessed 5,000 British troops landing at Closter Dock on the Hudson River and rode nine miles south to warn the Continental Army at Fort Lee, allowing for the Americans’ successful retreat ahead of the British advance.