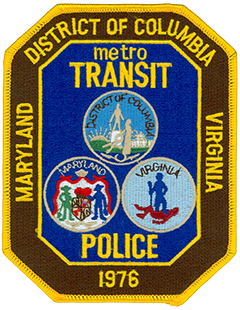 The Metro Transit Police Department is responsible for law enforcement and public safety at transit facilities throughout the Washington, D.C., metropolitan area. Established on July 4, 1976, through legislation passed by President Gerald Ford and the governing bodies of Maryland, Virginia, and the District of Columbia, the department is unique in having full local police authority in three different jurisdictions. The patch of the Metro Transit Police depicts the seals of these three jurisdictions along with its founding year.