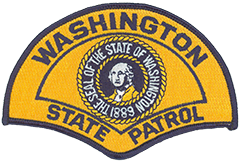 The Washington State Highway Patrol was created on June 8, 1921, and initially consisted of six motorcycle patrolmen assigned to police 3,119 miles of roadway (only some of which was paved). Renamed the Washington State Patrol in 1933, this internationally accredited agency now employs over 2,400 troopers and civilian employees and patrols more than 7,000 miles of state highways. The blue and gold service patch of the Washington State Patrol has been in continuous use since 1954. It first was designed in 1953 for the state’s territorial centennial and, due to its immediate popularity, was slightly altered the following year to remove the centennial dates and include the Washington state seal, featuring a portrait of George Washington.